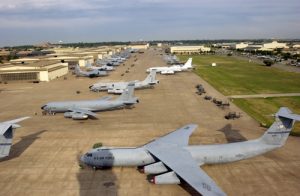 A Canadian-based wind industry operator has pulled out of a potential fight with the Air Force over locating a proposed wind farm near the Sheppard Air Force base in Wichita Falls, Texas.

Innergex, headquartered in Quebec  had originally planned for construction of wind farms near Byers and Bluegrove, Texas. Now it has backed out of the projects, leaving the Air Force celebrating the announcement.

“We are grateful for the decision Innergex has made regarding proposed wind projects in Byers and Bluegrove,” said George Woodward, a Public Affairs spokesman with the Air Base. “These projects would have had serious negative impacts on our ability to safely manage both civilian and military air traffic in those areas and would also have reduced the overall number of effective flying training days we have each year.”

At the time Innergex announced the proposed projects, the Air Base and the Sheppard Military Affairs Committee publicly opposed them. The Air base contended the wind farms would have negatively impacted its training routes.

“We appreciate the continued support of local civic, business and government leaders on this issue as we continue to work with them and with wind energy advocates to balance military readiness and economic development,” stated Woodward.

The Air Base is located just across the state line from Oklahoma where Gov. Mary Fallin recently signed a bill into law banning such wind farm developments near Oklahoma military air installations.

Glenn Barham, president of the Sheppard Military Affairs Committee celebrated the news but also said efforts are underway to copy Oklahoma’s move to protect military installations from wind farm encroachment. He said Sheppard had focused on keeping the wind farms out of the low-level flight routes for training pilots. There are 17 such flight routes and three were already abandoned because of nearby wind farms.

“There are others proposed that we have learned about that could cause the closure of two more routes. We are looking to educate everybody about encroachment,” Barham said.

For instance, he said, flight training routes are 10 miles wide and companies could chose to locate a farm closer to an edge, rather than the middle, of a training route.

When talking with a wind farm company, they may ask them to consider not placing a wind farm right in the middle of a training route, but rather to an extreme edge of the route.

“We believe that, by working together and communicating early in the process, we can reach mutually compatible solutions not only in and around military bases, but also around FAA-designated military training routes and operating areas in Texas and Oklahoma,” Woodward said.

Barham said SMAC representatives will be meeting with Rep. James Frank and the next senator-elect after November to consider proposition of similar legislation in Texas.