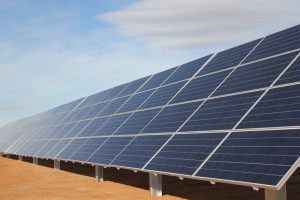 As Ron Hays at the Oklahoma Farm Report notes, more farmers in the U.S. are taking advantage of solar power for their electricity needs.

Federal tax credits and lower costs are spurring more solar growth in rural areas. While Oklahoma does not have much commercial solar development, it is growing. OGE has created three solar farms in the past few years.

One is at its Mustang power plant in west Oklahoma City. The Mustang far features 2,000 fixed and 8,000 sun-tracking solar panels. The company says they generate enough electricity for more than 1,000 homes.

OGE’s largest farm is near Covington in eastern Garfield County and sits on 80 acres of land. It has 38,000 solar panels capable of producing 10 megawatts of power.  The solar farm became operational in December 2017 and was completed in February of 2018. It produces enough electricity to serve nearly 2,000 homes.

OGE installed a tracking system which keeps the panels pointed directly at the sun throughout the day to maximize output. The system even monitors the amount of dust collecting on the panels, prompting cleaning robots to wash them when generation falls below a certain level.