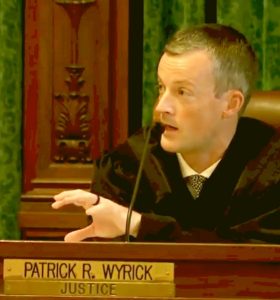 Oklahoma Supreme Court Justice Patrick Wyrick might have narrowly won a recommendation from the U.S. Senate Judiciary Committee to be confirmed as an Oklahoma City federal judge, but the Sierra Club thinks his ties to an energy company should disqualify him.

“Patrick Wyrick is an extreme ideologue who is unfit and unqualified to serve in the judiciary,” stated Sierra Club Democracy Program Director Courtney Hight. “Beyond his deep-rooted ties to scandal-plagued Scott Pruitt, Wyrick is heavily associated with those he may be asked to preside over.”

She said the Senate should “unquestionably” reject Wyrick’s nomination. The Sierra Club also issued a state filled with numerous critical claims against him.

“Wyrick maintains close ties with embattled EPA Administrator Scott Pruitt, who called Wyrick a “dear friend and trusted counselor.” Wyrick has previously worked with Pruitt to undermine commonsense environmental safeguards — including the Clean Power Plan, Mercury and Air Toxics Standards, and FERC’s demand-response rule — pushed for restrictions on women’s reproductive health, attacked protections for workers, and allegedly attempted to mislead the U.S. Supreme Court during one of his cases. Wyrick also has ties to Devon Energy, a company that lobbied him while he was Oklahoma’s Solicitor General, that he held stock in previously, and that has close ties to Scott Pruitt. Wyrick was also serving on the Oklahoma Supreme Court when it blocked the release of Pruitt’s emails detailing his relationship to the coal, oil, and fracked gas industries.”

“I am glad to see Justice Wyrick’s nomination passed out of the committee and will now head to the full Senate for a vote,” said Lankford. “Justice Wyrick has served the state of Oklahoma well in his role on the State Supreme Court, and he will continue to serve our state and nation well as a US District Court judge. I encourage my colleagues to support his nomination when it reaches the Senate floor in the days ahead.”

“As a Justice on the Oklahoma Supreme Court and the former Solicitor General for the State of Oklahoma, Justice Wyrick values the Constitutional role of the judiciary and is well-qualified to serve as the District Judge for the Western District of Oklahoma. I look forward to his swift confirmation before the full Senate.”

Committee chairman, Sen. Chuck Grassley of Iowa declined to delay the vote even though Democrats on the committee argued the American Bar Association had yet to issue a rating on Justice Wyrick.

” The ABA has had plenty of time to perform its evaluation. I’ve said before that I won’t allow outside groups to dictate the Committee’s schedule. Moreover, I’m skeptical of the usefulness of ABA ratings,” said Grassley in his opening statement. “It seems that the ABA’s ratings are used only as a political weapon by the minority. Well-qualified ratings are ignored when the Democrats already oppose a nominee, but non-ratings or not qualified
ratings are used against clearly qualified nominees, such as newly appointed 8th Circuit Judge Steven Grasz.”

Sen. Grassley went on to argue that regardless of the ABA’s opinion, Justice Wyrick was “highly qualified to serve on the district court.”