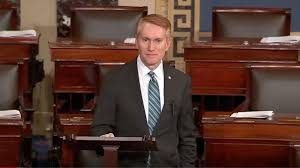 Oklahoma U.S. Sen. James Lankford recently spent a few minutes on the floor of the Senate boasting about how the economy has grown in Oklahoma, thanks in part he said to tax reform.

“Let me just pause and read a couple of headlines and give good news,” said the Senator in his remarks.

Oklahoma revenues are up 20 percent higher than what was expected he added.

“For our revenue to be up 20 percent higher than what was expected as a surprise, but a welcome surprise. And it’s a real sign in the turnaround in the Oklahoma economy, and it’s very good news for a lot of people.”

But Lankford also said it’s not isolated news because it’s happening nationwide with a real turnaround in the nation’s economy.

“I don’t often come to this floor and quote the New York Times , but let me do that today. The New York Times just a couple of days ago, ran the headline, ‘We ran out of words to describe how good the job numbers are’.”

He went on to say the New York Times admitted it ran out of words to describe how good the economy is nationwide. With unemployment at 3.8 percent and the lowest in17 years and consumer confidence at an 18-year high, the senator called it a “nice, strong, steady increase in our economy.”

But back to Oklahoma, he cited a recent poll that said Oklahoma City is number one for one of the best places in America to start a new business.  Further, Sen. Lankford cited Oklahoma’s recent move to create Opportunities Zones as a result of tax reform.

“I’m grateful for what’s happening in our economy because it’s not about numbers and statistics. It’s about individual families that have the opportunity to be able to find work.”