Wind money goes to legislators who supported the wind industry 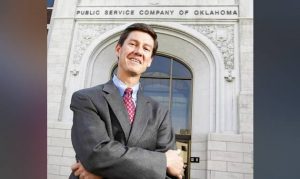 Pressure from the State Attorney General as well as hundreds of angry citizens apparently forced PSO to back off controversial plans to build a Wind Catcher transmission line through the city of Bixby.

As hundreds of angry citizens gathered Monday night for the city council meeting in Bixby to get an update on their fight with the utility, PSO announced it was withdrawing the plans for the line through the city.

Instead, it will seek an alternate route through Tulsa County. The line is meant to carry electricity from the Wind Catcher wind farm proposed in the Panhandle to eastern Oklahoma.

News on 6 in Tulsa reports a company spokesman told the city council its engineers had been working on finding an alternate route and created one that won’t go through Bixby.

PSO says it will replace larger structures with smaller ones.

“The structures will be lower profile than the ones there today, so I think it’s a great solution,” said Solomon.

PSO says the new technology will be more expensive, but it already promised the Oklahoma Corporation Commission it will keep costs as low as possible.

Solomon said PSO “will work very hard to make sure everything we do falls within that cost cap.”

PSO’s decision came after Bixby city leaders met last week with Attorney General Mike Hunter who joined their efforts in opposing PSO’s transmission line project. He filed a motion with the Corporation Commission as part of his opposition.

The Commission will meet Monday to consider PSO’s request for rate increases to pay for the project.

Despite PSO’s decision, some Bixby residents still question what prompted the utility to back off the project.

“They want to throw this alternate route out there without having the opportunity to ask questions,” said Bixby resident Robert Dixon.

But the Bixby City Council and several landowners say they want this in writing before they move on.