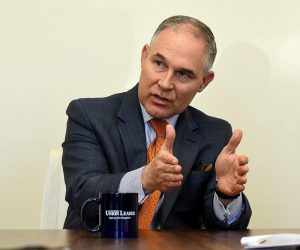 Environmental Protection Agency Administrator Scott Pruitt’s proposing a change in the way his agency regulates and protects the nation’s waterways from pollution.

In a memo released by his office, the former Oklahoma Attorney General  asked the EPA’s Office of Water and Regional Administrators to draft a proposal restricting the agency’s ability to revoke permits issued by the U.S. Army Corps of Engineers.

“Today, I am directing the Office of Water to take another step toward returning the agency to its core mission and providing regulatory certainty,” Pruitt wrote in the full text of the memo.

If the new proposal becomes policy, it would be the biggest change to how the EPA handles the dredging and filling of streams and waterways under the Clean Water Act in 40 years according to reports.

Specifically, the proposal would block the EPA from preemptively blocking a permit to discharge materials in waterways before the USACE has issued one or revoking a permit issued by the USACE after the fact. It would also require that regional administrators get approval from EPA headquarters before vetoing a permit and that they listen to comments from the public before doing so.

Once a formal draft is ready, the public will have a chance to comment on Pruitt’s proposed change, and it could lead to lawsuits by environmentalists and others who might oppose the proposed change.

Some contend the move would help oil and gas and mining. But Pruitt justified the change as making things simpler in the permitting process for businesses.

“This long-overdue update to the regulations has the promise of increasing certainty for landowners, investors, businesses and entrepreneurs to make investment decisions while preserving the EPA’s authority to restrict discharges of dredge or fill material that will have an unacceptable adverse effect on water supplies, recreation, fisheries and wildlife,” Pruitt wrote.

Pruitt’s memo cited a case in which the EPA suggested it would use its veto power, under Obama, to preemptively block a permit for the pending Pebble Mine in Alaska after concerns from conservationists and Native American groups that it would harm salmon fisheries and wetlands, according to The Associated Press.