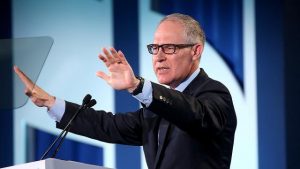 EPA Administrator Scott Pruitt recently responded to a heckler at one of his speeches by saying the left doesn’t want to talk about the truth.

The former Oklahoma Attorney General,  was speaking at a Faith and Freedom Coalition’s Road to Majority conference in Washington, D.C. when a woman protester interrupted him.

She held up a bottle of lotion over her head and shouted at Pruitt, before security guards quickly escorted her out while the crowded chided her.

The woman was trying to criticize Pruitt for reports that he had used his EPA staff to run personal errands for him. The claims against Pruitt are the latest in a long line of allegations against the way he’s operated the Environmental Protection Agency.

One of the reports claimed that Pruitt had his security detail run errands for him, including getting him his preferred lotion found at Ritz Carlton hotels.