Professor gets grant for 3-year study of impact of fracking 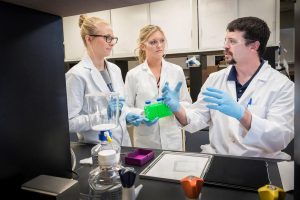 For the next three years, a West Virginia University assistant professor will study the impact of what has resulted in the U.S. becoming the world’s leading oil producer—-fracking.

The National Institutes of Health awarded public health assistant professor Travis Knuckles a $450,000 grant to look at how airborne particles  near wells that result from hydraulic fracturing affect human health.

The research will explore how particulate matter in the air from fracking sites can make it harder for the body to control how much blood enters the capillaries, which are the narrowest blood vessels, where oxygen is turned into ATP, which is a primary energy source for cells.

Knuckles said the goal is to determine if the particles near fracking sites affect the body any differently than particles found in typical urban areas, according to a release by West Virginia University.

“It’s a pretty hot topic right now,” Knuckles said, adding that other research into the topic is being performed in Pennsylvania as it pertains to fetal development outcomes.

The particulate matter at the center of Knuckles’ study is ultra fine and can penetrate deep into the lungs.

For example, one particle has a diameter of less than 2.5 micrometers, which is even smaller than a red blood cell.

Knuckles and his team will compare how airborne particulates influence microvascular tissue using samples collected from the Marcellus Shale Energy and Environment Laboratory near Morgantown and from downtown Morgantown. The researchers will also examine how the fracking-related particles’ toxicity decreases as the wind blows them away from the well site.

Knuckles said the grant is crafted in such a way that allows for the participation of undergraduate students to help with things like toxicology work and other ways to practically apply what they learned in class.