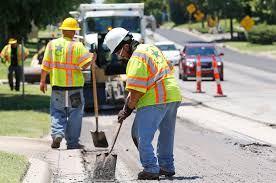 Safety awards were handed out for Oklahoma highway workers at this week’s meeting of the Oklahoma Department of Transportation Commission.

Workers were honored for putting their lives on the line to help construct and maintain state highways, interstates and bridges.  Safety is considered to be ODOT’s top priority and the agency conducts onsite reviews, accident follow-up and ongoing safety education.

In the past year, the number of employee injury accidents dropped by more than 41 percent.

The Commission and ODOT Executive Director Mike Patterson recognized the crews who demonstrated a continued commitment to safety in the past year. The Governor’s Safety Excellence Award is presented every year to the ODOT field division with the best overall safety record in the past year. This year, it went to Division Five which increased its safety performance record by 72 percent compared to a year ago.

Division five, headquartered in Clinton, had only two injuries and no lost days, which was the best performance of any division over the past ten years. Division Engineer Brent Almquist leads the commission which includes Beckham, Blaine,Custer, Dewey, Greer, Harmon, Jackson, Kiowa , Roger Mills, Tillman and Washita counties.

The Progressive Excellence Award recognizes the ODOT field division with the most improved safety rating. The award for 2017 was presented to Division Two, which is headquartered in Antlers under the leadership of Division Engineer Anthony Echelle. The division improved its safety performance by 58 percent since last year. Division Two includes Atoka, Bryan, Choctaw, Latimer, LeFlore, Marshall, McCurtain, Pittsburg and Pushmataha counties.

The Director’s Safety Awards are presented to the unit in each of ODOT’s eight field divisions and its Oklahoma City headquarters with the best safety record. Consideration is given to safety, housekeeping, training and equipment maintenance.