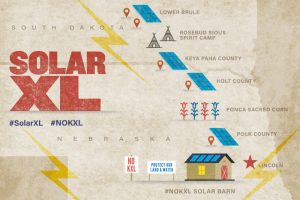 Opponents of the Keystone XL pipeline think they can block construction by building and installing solar panels in the path of the controversial line in Nebraska and South Dakota.

The group called BOLD Nebraska has launched the second phase of “Solar XL”, a plan to raise $60,000 to build solar energy installations in the path of the tarsands pipeline. As part of the fundraising drive, the names of those who contribute $25 or more will have their names included on plaques connected to the solar installations. 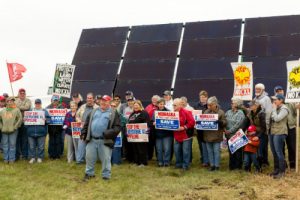 Protesters say they hope to build one new Solar Xl installation in Nebraska and two will be placed by Indigenous leaders on tribal lands in South Dakota. BOLD Nebraska, in an email this week indicated it had raised funds for three Solar XL installations in Nebraska.

“These new Solar XL installations will add to the existing resistance in the path of KXL that also includes the Ponca sacred corn planted inside the route along the historic “Trail of Tears,” the #NoKXL Solar Energy Barn, and Rosebud Sioux Spirit Camp in South Dakota,” stated leaders of BOLD Nebraska.

The Solar XL project was started in 2017 and the installations, according to the group, will “help power the homes, farms and Indigenous spirit camps of communities resisting the pipeline.”