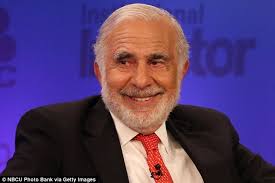 There’s a reason Carl Icahn is smiling. He got his wish—control of Oklahoma City’s SandRidge Energy during the company’s annual shareholders meeting on Tuesday. Now shareholders will wait to see what he does with the company. And how quickly he acts.

A day after he made a last-minute plea to shareholders to dump the current 7 members of the board, shareholders elected four of his nominees to the controlling board. They also elected two nominees put forward by the board while the 7th position was too close to call on Tuesday.

Gone were board chairman Michael Bennett as well as directors Kenneth Beer and David Kornder. It was in early May when the board voted to expand its numbers to seven. At

the time of the vote, Bennett opposed most of those nominated by Icahn, saying, “We continue to believe that turning control of the Board fully over to the slate of directors proposed by Icahn Capital, including its non-independent employees, presents numerous potential conflicts, and would be detrimental to the Board’s ongoing formal evaluation of strategic alternatives.  Expanding the Board and enabling shareholders to elect the directors they desire ensures the Board will continue to act in shareholders’ best interest.”

Icahn, owner of 13.6 percent in the company now has the ability to sell the firm as he has proposed.  In his letter on Monday to shareholders, he was critical of the board for not taking up the proposed merger from Midstates Petroleum in Tulsa. While SandRidge directors didn’t consider the offer financially strong, Icahn said they at least should have made a counter-offer, which they didn’t.

The rejection was one of many criticisms offered by Icahn who argued the directors overpaid company executives, including fired CEO James Bennett.

As for Icahn, he did not comment after his SandRidge victory and neither did his representative who attended the meeting. But investors did their talking as shares in SandRidge were up 3 percent in morning trading, reaching $16.30.

Icahn went public with his criticism of the board when it made a $746 million deal to acquire Bonanza Creek Energy Inc. of Denver, Colorado. His criticism forced the company to back out of the deal as Icahn called it too expensive and a move that would harm shareholders while benefiting company management.

Over the course of the past several weeks, the board responded with criticism of Icahn, accusing him of attempting a takeover to gain control on the cheap.