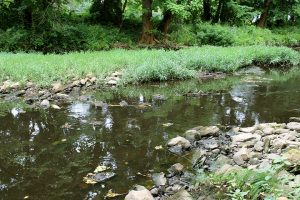 The Oklahoma Department of Environmental Quality and the State Department of Agriculture are investigating a mushroom farm spill that resulted in a large fish kill in Tar Creek.

The spill happened on Friday at a mushroom farm near Miami, according to Jeremy Seiger, director of the agricultural environmental management services division at the State Department of Agriculture, Food and Forestry.

“There was a release from J-M Farms from some of their piping (that) had a hole in it,” he said Monday. “It was contained, and cleanup is ongoing. The pipe was shut off Friday night, so there is no more release occurring.”

J-M Farms Inc. operates the mushroom farm and told the Joplin Globe, it was notified on Friday of the fish kill. The company said a walk-through of the farm’s collection system revealed a broken coupling on a pipe that had leaked into a waterway feeding the creek.

Scott Engelbrecht, a manager at the farm told the newspaper the last known time that the line had been in use was June 16.

“We immediately took steps to prevent any future flow into Tar Creek by creating an earthen dam at the mouth of the contaminated waterway where it feeds into the creek,” the farm company said in its statement. “Since that time, we have removed in excess of 60,000 gallons of contaminated water from the waterway and returned it to our holding ponds. We are working closely with the Oklahoma Department of Agriculture to ensure that all of the necessary steps are taken to thoroughly prevent additional contamination.”

The farm said the contaminated water originated from its compost yard runoff water holding ponds; the water there “contains concentrated nutrients but no pesticides or other chemicals,” owners said. The farm is collecting water samples under the direction of the state department “until we are confident the contamination has been eliminated,” it said.

Samples from the creek have been submitted to the Oklahoma Department of Environmental Quality for analysis, said Erin Hatfield, communications director for that agency.

The size and extent of the fish kill remained unclear Monday. The Grand River Dam Authority confirmed that its staff responded after notification of the fish kill, but it was no longer the lead agency in an investigation. Information wasn’t immediately available from the Oklahoma Department of Wildlife Conservation.

The incident remains under investigation by the Oklahoma Department of Agriculture, said Seiger, who was en route to Ottawa County for an assessment of the creek on Monday.

“(Sunday) afternoon, all you see is black water in Tar Creek, and that’s not normal,” she said. “Little fish are dead all along the creek. They’re not all floating; you can see them in the water where it’s shallow.”

“J-M Farms is a local, family owned business that is heavily invested in Miami and Northeast Oklahoma,” the company’s owners said in a statement. “We take pride in our record of being environmental stewards, from being a large recycler of many agricultural byproducts to being a partner in many local mine reclamation projects through the use of our spent mushroom compost. We are committed to ensuring that Tar Creek is returned to the same level of health as it was before this unfortunate incident.”