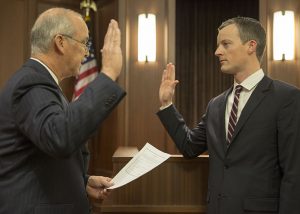 The U.S. Senate Judiciary Committee is scheduled to vote Thursday on the nominations of several persons to judgeships including that of Oklahoma Supreme Court Justice Patrick Wyrick.

But his ties to Oklahoma City’s Devon Energy could prove to be a stumbling block for a positive recommendation for Justice Wyrick to become an Oklahoma City U.S. District Judge.

As the Oklahoman reported this week, Democrats on the committee wonder about Wyrick’s role when he worked for Scott Pruitt who was Oklahoma Attorney General between 2011 and 2013.

It was when Devon Energy’s lobbyist Bill Whitsitt sent emails to Pruitt who made only slight changes and referred them to the Bureau of Land Management, taking claim for writing the messages. Wyrick was solicitor general at the time and last night said he didn’t recall and had no recollection to questions about the controversy.

Justice Wyrick isn’t also commenting publicly about his ownership of shares in Devon Energy which he sold before becoming a judge last year.