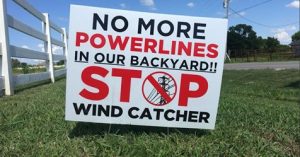 PSO’s $4.5 billion Wind Catcher project faces opposition not only from residents in the city of Bixby, but city leaders too.

At a recent Bixby city council meeting, citizens stepped forward with their fight against PSO’s plans to construct a high capacity power transmission line carrying electricity from a massive wind farm in the Panhandle to northeast Oklahoma.

“Wind Catcher is an example of out-of-control corporate greed,” charged Maurice Storm, one Bixby resident who voiced opposition to run the transmission line through the city.
“I think it would destroy the property value. I don’t think people want to live near these huge buzzing power lines.”

Another who is against the line is Kem Smith.

“I wanted to build a house right here,” he said as he pointed at a map during the council meeting where PSO officials explained the project. “Their line goes diagonally through 28 acres of my property, which if you look at that, that cancels out the value, can you imagine?”

“We recognize that people have strong passionate concerns and issues and we don’t want to downplay those at all,” he said. “We’ve vote the potential to save our customers over $2 billion dollars.”

In the end, the city council came up with a resolution against the project. Then Mayor John easton and Vice Mayor Brian Guthrie went to the State Capitol to meet with Attorney General Mike Hunter about how to stop Wind Catcher transmission lines from going through Bixby. 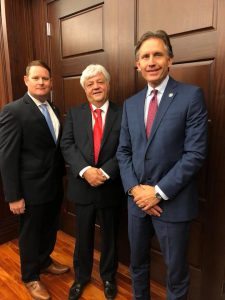 Residents of Bixby have gone so far in their opposition to create a “No Windcatcher” site on Facebook.