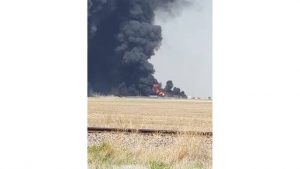 A fire that badly damaged a biofuels plant in western Kansas and forced the evacuation of nearby rural homes was extinguished Wednesday night.

The Clark County Sheriff’s office indicated there were no injuries reported from the fire at the EGE plant near the town of Minneola. The fire started about 12 p.m. and six hours later, was finally put out. But residents of a few homes had to be evacuated because of the massive amount of smoke.

Minneola is about 20 miles south of Dodge City. The plant manufactures additives designed to keep fertilizer from drifting into the air.