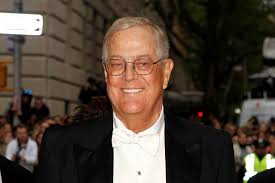 Declining health is forcing David Koch, 78, one of the brothers leading Koch Industries as well as a nationally known conservative group to retire.

The conservative billionaire made the announcement this week, leaving control in the hands of his older brother Charles. Together, the two have been a force in American politics since the 80s.

David Koch has been executive vice president of the Wichita, Kansas based Koch Industries. Nearly two decades ago, he was diagnosed with prostate cancer.

“David has always been a fighter and is dealing with this challenge in the same way,” Charles Koch wrote in the memo dated June 4.

The company said no decision had been made on David Kochs’ replacement.

David will also step down from his role as chairman for Americans for Prosperity, a grassroots conservative group that is a part of the Koch network, the memo said.

Over the years, the Kochs have donated billions into conservative causes and supported President Trump’s moves to roll back federal regulations as well as pulling out of the Paris global climate accord.