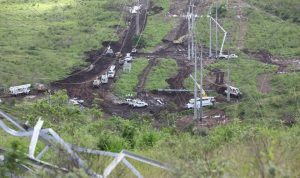 Despite the efforts of hundreds of Oklahoma utility and power company workers in the past several months following hurricane Maria last fall, Puerto Rico’s public electrical authority remains in trouble.

Especially if another hurricane hits the island nation of 3.3 million people.

Crews from PSO in Oklahoma, OGE were sent early to provide aid. Then Oklahoma City-based Mammoth Energy sent more than  800 workers as part of a $945 million contract to restore power.

But now after the $3.8 billion federal effort to end the longest blackout in U.S. history, Puerto Rico’s leaders are worried about what the next hurricane will do.

“It’s a highly fragile and vulnerable system that really could suffer worse damage than it suffered with Maria in the face of another natural catastrophe,” Puerto Rican Gov. Ricardo Rossello said.

You can understand if he’s nervous as the 2018 Atlantic hurricane season begins Friday and the weather forecasters predict anywhere from five to nine hurricanes will be produced. Some experts say another weather disaster is likely because of warmer seas which will create more powerful and wetter storms.

“It’s inevitable that Puerto Rico will get hit again,” says Assistant Secretary Bruce Walker, head of the US Department of Energy’s Office of Electricity, which is planning the long-term redesign of the grid run by the Puerto Rico Electric Power Authority.

Even though Oklahoma and other crews restored power months after the Sept. 20, 2017 storm, experts believe a hurricane much weaker than Maria could cause another massive blackout in Puerto Rico. Today, nearly 12,000 homes and businesses still don’t have power.

“The grid is there, but the grid isn’t there. It’s teetering,” says Hector Pesquera, Puerto Rico’s commissioner of public safety. Federal officials and Puerto Rican leaders blame decades of mismanagement that left the island’s power authority more than $9 billion in debt after declaring bankruptcy last year.