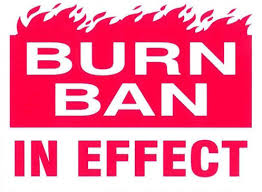 Oklahoma Governor Mary Fallin on Wednesday reduced the state’s burn ban to two counties but that might even be changed following Wednesday night and Thursday morning thunderstorms.

The storms brought more rain to the northwest but also produced a tornado near Vici and 80-mile an hour winds that ripped the roof from a mobile home in Fort Supply.

The storms developed only hours after Gov. Fallin said only Cimarron and Texas counties in the Panhandle remained under the burn ban.

“I’ve been in constant communication with Oklahoma Forestry Services as they continue to analyze the dry conditions and rainfall,” said Fallin. “The recent 6,000-acre fire on Black Mesa just affirms the need for continuing the ban in counties that haven’t received adequate rainfall.”

While the governor has the authority to issue burn bans for multiple counties, county commissioners also issue bans for their individual counties.  There are currently no county burn bans in effect, but citizens should always check with local officials or visit here to see if county burn bans are in place before doing any type of burning.

“Cimarron and Texas counties are just lagging behind the rest of the state in greening up,” said Oklahoma Forestry Services Director and State Forester Mark Goeller.  “Unfortunately, we are moving into our hot, dry summer so odds of any improvement continue to diminish.”

Unlawful activities under the ban include open flames, campfires, bonfires, and setting fire to trash, grass, woods or other materials outdoors. Gas and charcoal grilling is allowed provided that it is over a nonflammable surface and at least five feet from flammable vegetation.

“I commend Oklahomans for heeding these bans and for calling 911 as soon as they see or smell smoke,” Fallin said. “Citizens’ actions have made a difference in the number of fires during this prolonged drought.”