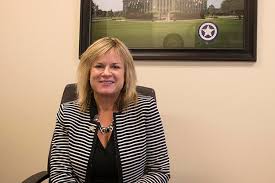 Mustang Rep. Leslie Osborn says it was her work with the State Labor Department nearly 8 years ago that led to her candidacy for Labor Commissioner.

The Republican lawmaker is still a State Representative until November but wants to win the GOP nomination in the June primary.

Interviewed this week on radio KOKC’s Tod Tucker Show, Rep. Osborn explained she first came to know the importance of the Labor Department when she was approached about creating standards for Compressed Natural Gas installation work.

“It’s like a missile sitting in the back of a van,” she explained, saying some professionals wanted to create rules and standards for CNG installation. “To take the bad actors out.”

It was a 3-year process where she worked with then Labor Commissioner Mark Costello.

“I saw some things I liked,” added Osborn who hopes to replace Melissa Houston, the current Labor Commissioner who chose not to seek election after being appointed to the job.

Osborn said the first thing she’ll do if elected is immerse herself in the job and learn the detailed functions of the $8 million a year agency with its 80 employees.

One major potential challenge for whoever is elected Labor Commissioner will be State Question 788, the medical marijuana issue to be decided by voters.

Osborn said it passes it could create problems because it was “written very nebulous.”

She predicted approval will result in a special session of the legislature at which time a framework will have to be developed. Osborn said rules will have to created to make sure it is administered properly.

Listen to part of the interview on Radio KOKC.