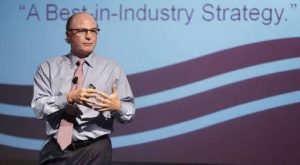 Oilman and cattleman Tom Ward has expanded his newly-formed company’s holdings in northwest Oklahoma with the purchase of more than 1,100 wells and 155,000 acres from Chesapeake Energy, the company he helped found years ago.

Ward’s BCE-Mach LLC announced the closing of the deal on land and wells in Woods and Alfalfa Counties.  BCE-Mach LLC, a partnership between Bayou City Energy Management LLC and Mach Resources LLC of Oklahoma City was formed with a focus on acquisitions with strong cash flow generation and drilling inventories.

The purchase involves nearly 1,150 wells with daily production of nearly 11,000 barrels of oil along with 143 million cubic feet of natural gas. As for financial details of the purchase, they were not disclosed.

However, Chesapeake admitted in February that three separate sales of its Mississippi Lime assets produced $500 million. The sales involved 3,000 producing wells and 238,000 acres.

“The Mississippi Lime in Woods and Alfalfa counties is a well-delineated play with an extensive inventory of future drilling locations,” said Mach CEO Tom Ward. “On a full cycle economics basis, this play competes with any in the Lower 48, and we are excited to join with a like-minded partner in Bayou City Energy focusing on projects with strong returns driven by stable cash flow.”

“This acquisition is an excellent fit for the strategy set out for BCE-Mach and represents precisely the type of opportunity BCE targets for its platform company investments,” BCE Managing Partner Will McMullen said. “We are thrilled to be commencing this partnership in earnest with a great cash-flowing asset and have the utmost confidence in the Mach team’s ability to maximize value from this well understood and infrastructure-advantaged position.”

Ward, a native of Seililng helped co-found Chesapeake Energy before moving on to create Tapstone Energy and SandRidge Energy Inc.

While many associate him with the oil and gas industry, he is also owner of TLW Trading, LLC, Heritage Feeders LP and TLW Land and Cattle. Heritage Feeders is described as one of the top 10 cattle feeders in the U.S.