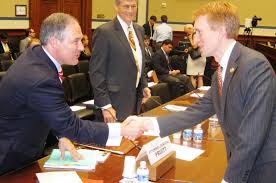 Count U.S. Sen. James Lankford as a supporter of EPA Administrator Scott Pruitt who faces a barrage of criticism and calls for firing or resignation in the midst of growing scandals about travel expenses, pay raises for aides and who he rented a condo from in Washington, D.C.

“(Administration officials) are still walking through it. EPA has their own ethics investigation and the hard part about this is all the facts getting out,” added the Senator.

He also defends Pruitt’s leasing a $50-a-night condo from the wife of a well-known Washington, D.C. energy lobbyist.

“(It) would seem normal for most Oklahomans to say, ‘If I know somebody in town, I’m trying to get a place, and in the meantime to be able to stay there.’ Now there’s all kinds of challenges about it and it becomes a big issue,” said the Senator. “In a normal world, this would seem very normal. But in a political word, everything gets dialed up, as far as the volume.”