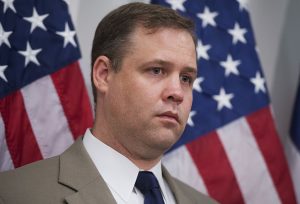 It could be a matter of only a few days before Oklahoma Rep. Jim Bridenstine resigns from office to become Administrator at NASA, the job he was sought for nearly 8 months.

Following his confirmation in the U.S. Senate, Bridenstine issued a statement.

“It is an honor to be confirmed by the United States Senate to serve as NASA administrator,” he said following the 50-49 vote. “I am humbled by this opportunity, and I once again thank President Donald Trump and Vice President Mike Pence for their confidence. I look forward to working with the outstanding team at NASA to achieve the president’s vision for American leadership in space.”

As to when he will resign from the U.S. House, an aide indicated, “Resignation will be within a few days, before swearing in, which is expected soon.”

When word of the confirmation reached acting NASA administrator Robert Lightfoot, he said, “He joins our great agency at a time when we are poised to accomplish historic milestones across the full spectrum of our work.”

Lightfoot, who recently announced his retirement has been the longest serving “acting” administrator of the National Aeronautics and Space Administration.

“Jim now takes the reins of this agency and its talented and dedicated workforce. I’m looking forward to him building on our great momentum and sharing our many strengths to help us make the next giants leaps on behalf of humanity.”

While Sen. Lankford spoke of Bridenstine’s military service, Sen. Inhofe went on the offensive against critics who waged a harsh campaign against Bridenstine.

“So we have an administrator who I think is going to do a good job,” he said.