Oklahoma’s Oil and Gas Rig Count Increased in Past Week

Northwest Oklahoma will be the site of a fracking sand plant that will create more than 130 new jobs for the area.

Preferred Sands, headquartered in Radnor, Pennsylvania has already broken ground for its frack sand plant to be located at the small community of Oakwood, midway between Watonga and Woodward.

In an interview with OK Energy Today, he said, “We’re hoping to have a temporary plant up and running on June 1st and a permanent plant on Sept. 1.”

The company already has two plants in Texas, one near San Antonio and another in the Permian Basin near Monahan, Texas. The company’s two remaining plants are in Nebraska and Arizona.

“This would be the 5th in our portfolio. We sold off our assets in the upper Midwest last year,” added Johnson. 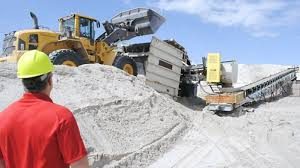 Preferred Sands is joining the list of other companies that have relied on frac sand mining next to the prolific oil and gas exploration activity.

In this case, it’s taking advantage of the massive amount of exploration underway in the STACK and the SCOOP. And Preferred Sands found the right geologic  product in the sandy soil around Oakwood.

“We are mining onsite. This is complete local sand. That was the original intent to come down to the area,” explained Johnson. “Plus, we’re eliminating the logistical cost of the sand coming from the upper Midwest.”

The Oakwood plant will involve mining the sand and trucking it to the well sites. No rail transportation will be involved and no frac sand from the upper Midwest will be moved to the site.

“We are trucking. We will be trucking directly to the wellhead,” said Johnson.

Preferred Sand has been in the business since 2007 and the expansion into northwest Oklahoma will be an economic shot in the arm for the region.

Most of the workers will be paid $15 to more than $30 an hour.  Johnson said the company will require workers with at least a  high school education and will have to pass a background check and drug testing.

“We want to make sure everyone can work safely. We want general laborers and hard workers. That’s what we’re looking for—people who are result oriented and are fast-paced workers.”

The company will need plant service operators and those with a general computer background will also be sought.

“Maintenance is our most highly skilled area,” he explained. “We have a wide range there—those guys who can turn wrenches, electrical, diesel mechanics.”

There will also be a big need for heavy equipment operators—those with experience in driving excavators, loaders and dozers.

Johnson said the company’s offering a good benefit package including 10 paid holidays, a medical and dental plan and fringe benefits.

A Preferred Sands job fair will be held Wednesday in Weatherford at the Holiday Inn Express from 9 a.m. until 7 p.m.