Condo Conflict of Interest Catching up With Scott Pruitt 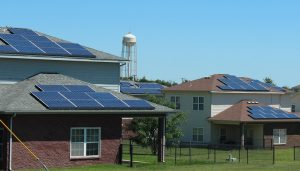 Balfour Beatty Communities, the firm that installed the photovoltaic panels on home roofs in the Sheppard AFB Homes community says the savings were more than $30,000.

Sheppard AFB Homes is a Balfour Beatty Communities owned and managed housing community serving active Air Force families at the air base. The total solar system has a capacity of 1.1 megawatts and contributes more than 30 percent of the community’s total annual power needs.

The system became fully operational in July 2016 and required no out-of-pocket cost for the Air Force. Balfour said since reaching operational status, it has exceeded energy savings expectations.

Savings from the rooftop solar program have been reinvested into community improvements at the community. The improvements include roofing and heating and air conditioning upgrades.

The company’s rooftop solar program is also operational at a dozen other military communities including Army, Navy and Air Force installations. Balfour Beatty, headquartered in Philadelphia, Pennsylvania,  has more than 50,000 residential units and $6 billion in real estate assets under management.