ConocoPhillips Wraps up Purchases in Permian, Louisiana and Canada 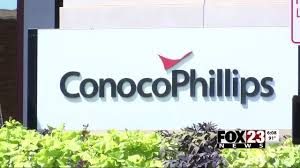 ConocoPhillips says it closed or entered definitive agreements for nearly $250 million in proceeds from the sale of non-core assets in the first quarter of 2018.

In an update on disposition activities, the Houston company with major operations in Bartlesville said several small packages were also closed during the quarter in the Permian Basin.

Another package of what the company called “largely undeveloped acreage” in South Texas should close in the second quarter. But the production impacts from the transactions are described as “minimal.”

In February, the company acquired nearly 245,000 acres of unconventional acreage in the Austin Chalk play in central Louisiana.  Drilling of several exploration wells is expected to start yet this year.

Matt Fox, executive vice president of Strategy, Exploration and Technology called the purchases a strengthening of the company’s portfolio.

“The acreage we’ve acquired in Louisiana and the Montney has the potential to add to our low cost of supply resource base without requiring significant near-term capital commitments.”

He said the purchases were made with money from asset dispositions.