Enable Won’t Be Forced to Remove Pipeline After Losing Lawsuit 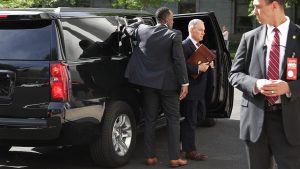 It was classic Washington D.C. politics on display Thursday as EPA Administrator Scott Pruitt went before two House committees and faced an onslaught of accusations and questions.

Regardless of whether you were a supporter of Pruitt, the former Oklahoma Attorney General, one thing was clear…politics took the center stage.

In his first appearance since a series of scandals and spending controversies shook his time as EPA leader, Pruitt was accused by Rep. Frank Pollone Jr., a Democrat from New Jersey of being an “embarrassment” to the President.

“You are unfit to hold public office and undeserving of the public trust. Every indication we have is you really should resign.”

But it didn’t take long for Republicans on the House Energy and Commerce Committee to defend Pruitt.

“I was hoping that we could stay on policy as much as we could today, but I see some just can’t resist the limelight,” Rep. McKinley (R-WV) said during the hearing, describing Pruitt’s scandals as “a classic display of innuendo and McCarthyism.”

“Mr. Pruitt, you’re not the first victim of Washington politics.”

And Rep. Barton offered a comment about Pruitt’s first-class travel, adding, “You’ve been attacked for flying first class. Was that illegal? It may look bad, but it’s not illegal.”

Another Democrat, Rep. Anna G. Eshoo of California joined in the criticism of Pruitt.

“You have a solid record of violating ethics rules from the state level to the federal government. I think it’s an embarrassment.”

When Pruitt would not answer yes-or-no to her questions and attempted explanations, she cut him off.

“With all  due respect, I may be elected but I’m not a fool. This is not ‘dodge-question’ day.”

In the afternoon session before the House Appropriations Committee, Rep. Diana DeGette of Colorado questioned Pruitt about the recently-reported real estate deal in Oklahoma City. She referred to the purchase of his home as a “shell company” but Pruitt quickly denied it.

“It’s not a shell company,” he replied and said such financial structures were common.