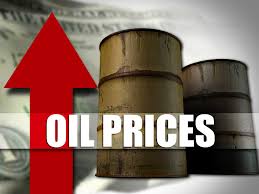 Now traders and others are curious to see what will happen Monday on the New York Mercantile Exchange and in  London.

WTI prices on Friday rose to their highest level in more than  a week, going up $1.15 a barrel on April contracts.

Brent crude on May contracts in London’s ICE Futures Europe exchange rose $1.09 and finished the day at $66.21 per barrel.

What’s behind it?  Observers point to a number of things that made traders nervous. First there is the effort by OPEC to cut output to tighten global markets. But their efforts are also being blocked by the increase in U.S. crude oil production as drillers in places like Oklahoma’s STACK and SCOOP keep hitting well after well.

Then there is the situation in Venezuela which could worsen any global supply deficit later in the year. Throw in the firing of Rex Tillerson as U.S. Secretary of State and talk of a trade war because of steel tariffs proposed by President Trump and there you have it—uncertainty.