Texas Chemical Plant Fire Being Allowed to Burn Out

Court Ruling Could Lead to More Robocalls on Your Smartphone 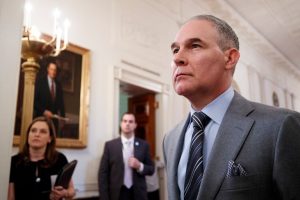 EPA Czar Scott Pruitt might not be liked by environmentalists and critics of the Trump White House, but he’s supported by conservatives. And even the New York Times paints the former Oklahoma Attorney General as a man with strong political ambitions.  Strong enough to maybe make a run for the U.S. Senate or governor in Oklahoma. Strong enough to be ready and waiting to become U.S. Attorney General should Jeff Sessions being removed by the President or resign from the job. Maybe even the White House?

Pruitt was a headline speaker at last month’s Ronald Reagan Dinner sponsored by the Conservative Political Action Conference. The Times reported the dinner has historically been a place to put the spotlight on rising political stars.

Here’s how the Times described him:

“In the past year, Mr. Pruitt has emerged as a hero to President Trump’s supporters for his hand in rolling back environmental rules at an agency long disliked by farmers, the fossil fuel industry and the far right. And he has occasionally shocked his employees by criticizing the very agency he heads.”

Pruitt was also described by the paper as “using his perch as Mr. Trump’s deregulatory czar to position himself for further political prominence.”

But what about this White House stuff?

The endgame, say people who have spoken with Mr. Pruitt, is a possible run at the presidency in 2024 or later. “It was always known among elite Republicans that this guy had higher ambitions,” said Keith Gaddie, a professor of political science at the University of Oklahoma. “The question was just, ‘Does he want to be president, or does he want to be attorney general?’”