Interest Rolls Along in Oklahoma’s STACK 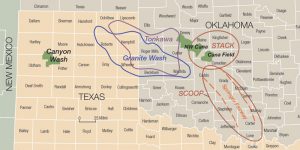 The latest permits to drill from the Oklahoma Corporation Commission indicate there is continued heavy interest in the state’s STACK oil play.

At least 12 permits to drill were granted for Blaine County, one of the three principal counties that make up the high-producing play.

Six of the permits were issued to Continental Resources Inc and two to Devon Energy.

Three new permits to drill were issued for Canadian County, also in the STACK.  Two were issued to Camino Natural Resources while the third went to Chaparral Energy LLC.

The permits covered the period of March 22 through the 28.