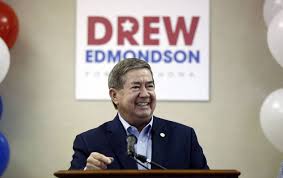 Whether Democratic former Oklahoma Attorney General Drew Edmondson will get the support of the state’s oil and gas industry in his run for governor remains to be seen.

Especially in light of his stance for higher gross production taxes on the industry.

As The Oklahoman reported in Sunday’s edition, Edmondson wants to raise the gross production tax to the full 7 percent. He is opposed to some new wells being taxed for 3 years of production at only a 2 percent rate. Edmondson told the paper the lower rate was only meant to be an incentive to spark horizontal drilling in shale.

“It worked and now that’s the way they drill. So it does not need to be subsidized or encouraged with a tax break. People are drilling because they make a ton of money off oil and gas.”

Raising the gross production tax is only one of his plans to get the state government out of his budget crisis. He also wants to raise taxes on cigarettes to $2.53 a pack.

Now 71 and 7 years out of office, Edmondson wants to be Governor and also wants more money for teachers and state workers.

He has raised $841,000 for his campaign and $19,000 came from the Oklahoma City law firm he picked years ago to sue tobacco companies. He picked the same firm, Riggs, Abney, Neal, Turpen, Orbison and Lewis to sue poultry companies over pollution of the Illinois River.