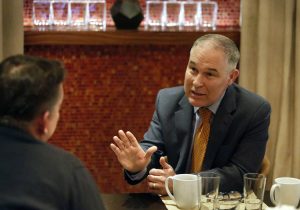 Whenever EPA Administrator Scott Pruitt opens his mouth and talks about climate change and the impact of carbon emissions, his critics react quickly.

Such was the case when Pruitt, the former Oklahoma Attorney General gave an interview to a TV reporter in Las Vegas. The New York Times carried the observations of reporter Lisa Friedman who covers climate and environmental policy from Washington, D.C.

“Scott Pruitt, the administrator of the Environmental Protection Agency, suggested this week that climate change might not be a danger for humanity,” wrote Friedman.

In the TV interview, Pruitt suggested rising global temperatures are “not necessarily a bad thing” and that “humans have flourished” during times of warming trends.

” His comments represent a new wrinkle in Mr. Pruitt’s history of questioning the established science of climate change,” she added.

“I do think how Mr. Pruitt talks about climate tells us something important about how folks on the right view climate,” said Joseph Majkut, director of climate policy at the Niskanen Center, a libertarian think tank that advocates conservative solutions to climate change. Mr. Majkut cited in particular the search for what he referred to as “counter-narratives.”