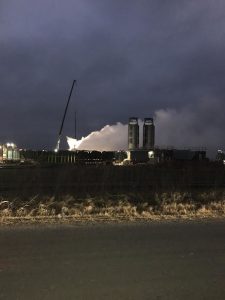 A water vapor leak early Sunday morning resulted in the evacuation of a Chickasha oil rig operated by Continental Resources of Oklahoma City.

At last report, there were no injuries according to the Grady County Sheriff’s office and Grady County Emergency Management office.

The evacuation happened around 5 a.m. Residents of a nearby mobile home were urged to leave too, according to Dale Thompson, Grady County Emergency Management Director.

The well was located near N. 4th street and Reding Road close to Chickasha.

Workers were attempting to prevent a release of natural gas and oil products along with the water.  Water trucks were being used to remove water from the site.