National Tornado Summit to be held in OKC

The state of Texas has scrapped a nearly six-year old plan to protect a small lizard from growing oil and gas activity in the western part of the state.

The dunes sage brush lizard thrives in the Permian Basin, the largest oil producing area in the U.S. In 2012, the state jumped ahead of a possible federal government move and developed a plan to preserve the lizard’s habitat. But as the Austin American Statesman reports, it apparently wasn’t working and the state has started a rewrite.

The plan never did have the support of conservationists who contended it was written to favor petroleum interests.

“It stunk to high heaven,” Gary Moward told the paper. He ran the U.S. Fish and Wildlife Service’s Texas office until 2013. “It should have never been passed.” 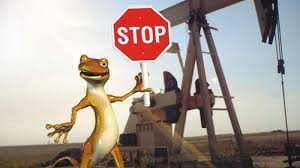 Species protection in Texas falls under, of all offices, the head financial officer. Former Comptroller Susan Combs had the assistance of oil and gas companies in drawing up the plan.

Two major challenges apparently forced the rewrite. One is that the lizard habitat, as identified by the original plan is apparently twice as larges as thought in 2012.

Secondly, the frac sand mining industry has exploded as companies seek to fill the need for the product in the Permian Basin. And the mining is digging up thousands of acres where the lizard lives.