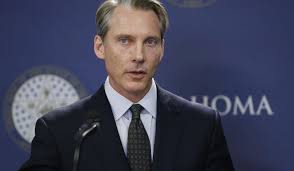 With a nearly 84 percent increase in gross production tax revenue on oil and gas from January 2017 to January 2018, monthly gross receipts to the Oklahoma Treasury entered a second year of growth.

State Treasurer Ken Miller said the collections in January topped the same month of the prior year by more than 15 percent.

January gross receipts of $1.1 billion show an increase in the monthly reports for the 12th time in 13 months. Prior to January of last year, monthly receipts had shown contraction for 20 consecutive months. Combined gross receipts for the past 12 months have grown by 7.5 percent.

But the state also saw a drop  in motor vehicle tax collections. Motor vehicle taxes produced $66.7 million, down by $5.2 million, or 7.3 percent, from the same month of 2017.

“Gross collections would indicate Oklahoma, as with the nation, is experiencing increased economic activity,” Miller said. “This data is certainly good news, but as investment disclosures always say, ‘past performance is no guarantee of future results.’ Gross receipts reports are indicators of what has already occurred, not predictors of future activity.”

Changes in monthly gross receipts during the past 12 month have ranged from a decrease of 2.7 percent in March to an increase of 15.1 percent this month. The rate of growth has generally accelerated with each passing month.

The new revenue accounts for 17.4 percent of the growth in January collections compared to the prior year. Out of more than $5.9 billion in collections since August, $570.4 million, or 2.4 percent, has resulted from law changes from last session.

At 4.1 percent, Oklahoma’s seasonally adjusted unemployment rate in December was down by one-tenth of a percentage point from the prior month, according to figures released by the Oklahoma Employment Security Commission. State jobless numbers improved by seven-tenth of a percentage point over the year. The U.S. jobless rate was also set at 4.1 percent in December, equal to Oklahoma’s rate for the first time in six months.

The Oklahoma Business Conditions Index has topped growth neutral for six consecutive months. The January index was set at 57.8, down from 59.3 in December. Numbers above 50 indicate anticipated economic growth during the next three to six months.

Gross income tax collections, a combination of individual and corporate income taxes, generated $450 million, an increase of $70.2 million, or 18.5 percent, from the previous January.

Sales tax collections, including remittances on behalf of cities and counties, total $407 million in January. That is $41.3 million, or 11.3 percent, more than January 2017.

Other collections, consisting of about 60 different sources including use taxes, along with taxes on fuel, tobacco, and alcoholic beverages, produced $156 million during the month. That is $16.1 million, or 11.5 percent, more than last January.

Gross income taxes generated $4.1 billion for the period, reflecting an increase of $167.9 million, or 4.3 percent, from the prior 12 months.

Oil and gas gross production tax collections brought in $564.9 million during the 12 months, up by $206.9 million, or 57.8 percent, from the previous period.

Motor vehicle collections total $759.7 million for the period. This is an increase of $13 million, or 1.7 percent, from the trailing period.