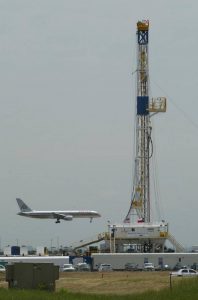 A new study on earthquakes under the DFW International Airport says they continued for seven years after Oklahoma City-based Chesapeake Energy stopped operations of a nearby wastewater injection well.

The study was carried out by scientists at Southern Methodist University in Dallas. Writing in the Journal of Geophysical Research, the scientists said the quakes started in 2008 just seven weeks after Chesapeake Energy started injecting wastewater into the well. The well was located at the south end of the airport.

Researchers with SMU and the University of Texas at Austin investigated and concluded the earthquakes were caused by the injection well. Chesapeake stopped injections in the summer of 2009 but the earthquakes continued through the end of 2015. The largest was 3.4 magnitude and it happened three years after the company closed the well.

“It’s very surprising that one year of injection could produce earthquakes running for more than seven years,” said Paul Ogwari, the study’s lead author and a post-doctoral researcher at SMU in an interview with the Dallas Morning News.

He explained more than 80 percent of the quakes around the airport happened in the first seven months of the well’s operation. Since then, north Texas has experienced other earthquakes and most were around five towns and cities—Cleburne, Azle, Venus, Irving and Dallas.

Other studies, notably by the U.S. Geological Survey have concluded in Oklahoma that wastewater injection wells caused numerous quakes.

Just a year ago, the Dallas/Fort Worth Airport board okayed a $8.2 million deal with Chesapeake to settle a lawsuit that accused the drilling company of not living up to its drilling commitments.  The airport board said Chesapeake didn’t fulfill terms of a 2012 settlement of an earlier lawsuit which claimed the company had shortchanged royalty payments.