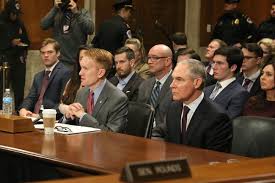 Environmentalists who have criticized Environmental Protection Agency administrator Scott Pruitt for his first-class air travels are being blamed by one U.S.  Senator for the necessary of the pricey-travel.

Sen. James Lankford says it is the harsh critics of Pruitt who forced the EPA leader to travel the way he does.

“There’s some of his critics that have been very, very outspoken against him, not for what he’s doing but for what he’s not doing…..he’s not trying to push the EPA like the Obama administration EPA did,” said the Senator in an interview with OK Energy Today.

“He’s also faced unprecedented personal threats against him and his family that’s chilling in our political debate.”

His defense of Pruitt echoes the response from Pruitt’s staff at the giant agency as reported earlier in the week by OK Energy Today.

“When it is required for those individuals to use upgraded security we should do that,” added Sen. Lankford. “We’ve had situations on aircraft where Scott Pruitt sat in some of the coach area and people came through the aisle screaming and cursing at him.”