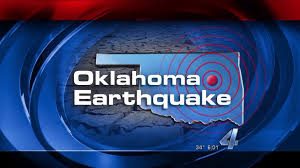 Earthquakes shook southern Oklahoma on Sunday then rattled the northern part of the state early Monday morning, according to the U.S. Geological Survey. But no injuries were reported and no damage as well.

Southern Oklahoma normally doesn’t get many quakes but the Sunday event near Elmore City in Garvin County measured 3.1 magnitude.  It was in an area where there has been extensive oil and gas exploration in the past few years. The quake was registered at 3:39 a.m. and its epicenter was 8 miles northwest of Elmore City. The USGS said the epicenter was also 3 miles deep.

The Monday morning earthquake near Dover measured 3.7 magnitude and struck at 2:20 a.m. The USGS said its epicenter was 3 miles north of the Kingfisher County town which made it also 12 miles north of Kingfisher.

The quake was about two and a half miles deep. The USGS initially reported it as a 4.5 magnitude quake but the agency later downgraded its magnitude.