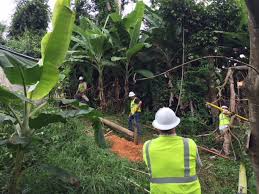 Following a month of 16-hour days working to restore power to the hurricane-battered island of Puerto Rico, a dozen workers from Public Service Company of Oklahoma (PSO) are now back home.

The employees were among a group of nearly 70 workers from PSO and its sister companies across AEP who flew to Puerto Rico on January 27 to join the massive effort underway to restore power on the island.

The PSO workers operated from a staging area in Caguas, a remote and mountainous region of Puerto Rico about 20 miles south of San Juan. It is an area that was heavily affected by Hurricane Maria.

Based in Tulsa, PSO serves more than 545,000 customers in eastern and southwestern Oklahoma.