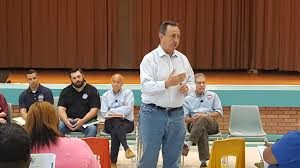 The former Oklahoma banker who had no environmental experience when he was picked by EPA Administrator and friend, Scott Pruitt to manage the agency’s Superfund sites is actually getting some good reviews from environmentalists.

Ever since being picked last year, Albert “Kell” Kelly has refused to talk with reporters.

“Truth be told, he’s been doing a good job,” said Lois Gibbs in an interview with E and E’s Climate News. She is founder of the Center for Health, Environment and Justice.

“He’s out there making things happen.”

Known as the “mother of Superfund”, she has criticized Kelly but also thinks his travels to West Virginia, Montana and other states with Superfund sites has been good for the EPA.

When Kelly was named to the EPA, the appointment drew criticism because his professional life had been as running his family-owned SpiritBank. And when critics learned Kelly had been banned from banking by the Federal Deposit Insurance Corp. just two weeks after landing the EPA job, that caused even more headlines.

Pruitt, the former Oklahoma Attorney General brought Kelly on board to create more of a business sense in managing the EPA’s Superfund program.

As E and E reported, Kelly has encouraged companies to pay for the Superfund cleanups, explaining they were responsible for the pollution.

While Kelly doesn’t want to talk with reporters about his job, former Oklahoma Gov. Frank Keating responded and described the former Bristow banker as “a man of high integrity.”