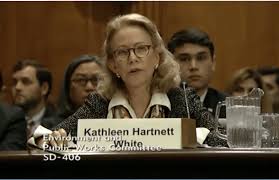 President Trump has decided to withdraw at least one of his controversial nominations.

While Oklahoma congressman Jim Bridenstine’s nomination to become Administrator at NASA is on hold because of opposition by Florida Sen. Marco Rubio, the White House has decided there’s too much opposition for Kathleen Harnett White to become chair of the White House Council on Environmental Quality.

She’s been under criticism from Democrats and Republicans alike in the Senate because of what they contend are her “extremist views and disregard for science.”

In addition, hundreds of scientists have signed a letter calling on the President to drop the nomination. Harnett White had been an environmental regulator and policy analyst in Texas when she was nominated last November. But as she went before Sen. Jim Inhofe and others on the Senate Environment and Public Works Committee, she encountered tough questioning.

The Democrats called her unqualified to be the government’s top environmental adviser and policy coordinator. They cited her poor command of basic climate and environmental science.

“Her tone, her words and her actions are simply unacceptable,” he said. Carper accused her of having a “disdain for science” and “staggering disrespect for people who have views with whom she disagrees.”

As for Rep. Bridenstine’s nomination, he narrowly won committee confirmation but the full Senate still must vote on his nomination. And Sen. Marco Rubio is one of those who put a hold on the vote, saying he has serious questions whether Bridenstine would keep politics out of the space agency.