Plains All American Pipeline Finished 2017 on a “strong note” 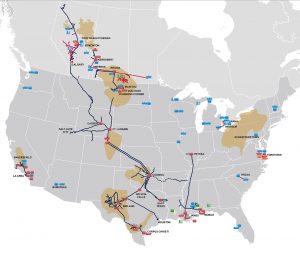 Plains All American Pipeline, L.P., with its system that brings oil into the storage farm at Cushing, Oklahoma reported  fourth quarter and full-year 2017 earnings.

The company reported 2017 and the last quarter were healthy enough that it reduced total debt by $1.5 billion in the 4th quarter and ended 2017 with $3 billion in liquidity.

“We are pleased to report that PAA finished the year on a strong note, having made significant progress on the plans we outlined in August of 2017,” stated Willie Chiang, Executive Vice President and Chief Operating Officer of Plains All American Pipeline.

The company also completed construction and put the new Diamond and STACK JV pipelines into service. It also finished capacity expansions for the Catus I and BridgeTex pipelines, adding more than 275,000 barrels a day to the company’s net transportation capacity.

The 4th quarter 2017 Transportation segment adjusted earnings grew by 27% compared to 2016 and came primarily as a result of increased volume in the company’s Permian Basin systems.

The 4th quarter 2017 Facilities segment had an adjusted earnings increase of 85 over the 2016 results. The increase was primarily driven by increased NGL storage and fractionation services and higher throughput fees and additional storage capacity at Cushing and Patoka, Illinois.