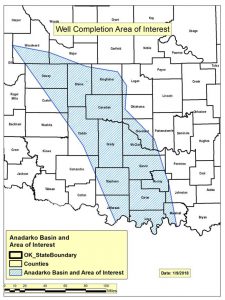 The Oklahoma Corporation Commission announced a new protocol this week in an effort to reduce earthquakes due to well completion and fracking activities in the STACK and SCOOP, the state’s biggest oil and gas plays. And the changes have the support of the Oklahoma Geological Survey.

“The overall induced earthquake rate has decreased over the past year, but the number of felt earthquakes may be linked to well completion activity, including hydraulic fracturing in the SCOOP and STACK has increased,” he said in making the announcement. “These events are relatively rare and smaller on average than those linked to injection activity. Most importantly, the risk of such events appears to be manageable.”

He said the new changes are part of the commission’s effort to learn how to mitigate the risk of causing earthquakes.

The new changes include three basic requirements. All operators in the defined area will be required to have access to a seismic array that will give real-time seismicity readings.

The minimum level at which the operator must take action has been lowered from a 2.5 magnitude to 2.0 magnitude.

Some operators will have to pause operations for 6 hours at 2.5 magnitude.  Previously, they had to pause when a magnitude 3.0 earthquake hit.

“While more study needs to be done, the indications are that those operators who have their own seismic arrays and took actions when there were seismic events too small to be felt decreased the risk of having multiple, stronger earthquakes,” said Baker.

“Ultimately, the goal is to have enough information to develop plans that will virtually eliminate the risk of a felt earthquake from a well completion operation in the SCOOP and STACK.”

State Seismologist Dr. Jake Walter said to accomplish the goal of reducing the risk of strong earthquakes from wastewater injection, the state must add to its existing state seismic network. He explained it must build a system capable of providing the needed data 24 hours a day. Currently, the OGS seismic network detection capability ranges between 2.0 and 2.5 magnitude across Oklahoma.

“The cost associated with expanding the seismic network would be a relatively small investment that would help to ensure the safe development of Oklahoma’s billions of dollars worth of oil and natural gas,” said Dr. Walter. “When coupled with other data on oil and gas activities that we hope will be forthcoming, we could develop a framework that would enable operators to know before they commence operations just what the estimated seismicity risk could be, what steps to take beforehand and what to do during operations to minimize seismic hazards.”

Despite the new steps announced this week for the STACK and SCOOP, the regulators and scientists also believe the threat of earthquakes in those two oil plays is much smaller than the chance of earthquakes caused by wastewater injection in the north central part of the state.

“There is broad agreement among researchers that disposal of these large amounts of water into the Arbuckle, the state’s deepest formation, can be linked to the high earthquake rate we saw in recent years within parts of the Area of Interest,” said Baker. “By comparison, the SCOOP and STACK plays have very small amounts of produced water and whatever earthquake activity there is, tends to be much smaller.”

He said less than four percent of detectable induced earthquake activity in the state can be linked to hydraulic fracturing.

“While the earthquake rate in the large AOI has been dropping since limits on disposal were put in place by the OGCD, disposal into the Arbuckle formation with the AOI is still the larger concern,” added Baker.