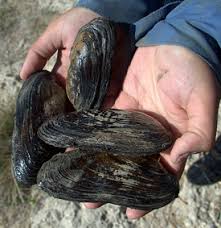 The Texas Hornshell, a freshwater mussel was recently listed by the federal government as “endangered” and the natural gas industry in the state doesn’t like it.

The industry is suggesting the listing might even lead to an impact on oil and gas drilling in the Permian Basin and the Eagle Ford. The government contends the hornshell could be close to extinction in Texas and parts of New Mexico.

Texans for Natural Gas is a group that says, “Extreme environmentalists may have won this battle, but it will continue to fight.”

The listing was an action taken by the U.S.Fish and Wildlife Service on Feb. 9 which said the Hornshell is endangered and thus is listed under the Endangered Species Act. The Hornshell is also found in southeast New Mexico.

The final rule becomes effective March 12, 2018 and is unchanged from the rule when it was first proposed in 2016. The Fish and Wildlife Service contends the Texas hornshell is an endangered species because of the impairment of water quality, loss of flowing water and accumulation of fine sediment, predation and barriers to host fish movement and the effects of climate change.

Even the government admits the designation could affect ranching, oil and gas and other business operations, especially those that may result in the discharge of chemicals.

Currently five known populations of Texas hornshell remain in the United States: Black River (Eddy County, New Mexico, Pecos River (Val Verde County, Texas), Lower Canyons of the Rio Grande (Brewster and Terrell Counties, Texas) and Lower Rio Grande near Laredo (Webb County, Texas). The Service states that of these five known remaining isolated populations in the United States none are currently considered highly resilient and finds that the Texas hornshell is in danger of extinction throughout its range.

“We must work to end this type of ESA abuse that could impact Texas energy production,” said Texans for Natural Gas.

The Hornshell is found in West Texas in the Rio Grande, the Pecos River and the Devils River. Texans for Natural Gas contend the listing “could potentially threaten Texas oil and natural gas jobs–and significant amounts of revenue that help fund local schools and  roads in the Permian Basin  and Eagle Ford.”

In an email notice about the steps taken by the federal government, the pro-natural gas organization claimed it might even be possible that environmental activity would try and use it was a way to block production.

“Anti-fossil fuel activists want to shut down oil and gas in the Lone Star State, and they are pushing hard. But we Texans can fight back,” stated the group in its email asking for support.