National Rig Count Grew while Oklahoma’s Slipped in Past Week 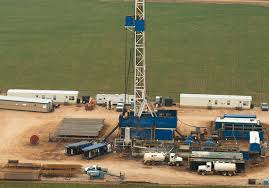 While Oklahoma’s oil and gas rig count slipped in the past week, the national count added to hit 978.  Figures from Baker Hughes Co. and the Independent Oil and Gas Service show an additional 3 rigs nationwide.

One more oil rig was added to hit 799 in theU.S. while two more gas rigs were put into operation making 179 across the country.

Oklahoma’s count slipped by two to reach 121 while Texas added 3 to hit 482. But the state rig count is still about 20 percent higher than last year at this time. Colorado’s count grew by one to reach 33 while the count in  Kansas slipped by one to drop to 37.

In New Mexico, two more rigs were added to hit 87 while in North Dakota, the grew by one to reach 49.

Of the oil plays, the Woodfords in Oklahoma remained at 8 while the Granite Wash in Oklahoma and the Texas Panhandle stayed at 12.

The DJ-Niobrara in Colorado grew by one to 26 while the Mississippian in Oklahoma and Kansas remained at 4. the Permian Basin added two to hit 435 working rigs.