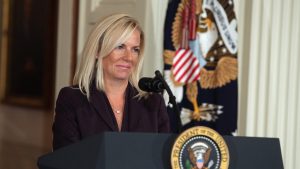 Natural disasters are nothing new in Oklahoma, a state known for its tornadoes. So perhaps it only made sense for Gov. Mary Fallin to lead the discussion on disaster response in a meeting of the Council of Governors with the U.S. Secretary of Homeland Security at the Pentagon.

It happened Friday at a meeting of the Council of Governors and the National Governors Association where the governors met with Homeland Security Secretary Kirstjen M. Nielsen.

“In Oklahoma, we are subject to a lot of severe weather like tornadoes, ice storms and flooding, and events, such as recent wildfires,” said Fallin, who is co-chair of the Council of Governors. “By meetings such as this, we can all learn from each other how to better prepare for and recover from natural catastrophes.”

“We discussed how the federal partners can better work with the states to ensure a clear and efficient process for disaster response and coordination with FEMA, especially in large-scale relief efforts involving multiple states as was seen with Hurricanes Harvey and Irma,” Fallin said.

In addition to talking about a collective response to natural disasters, the group discussed protecting the American people from threats, including terrorism and cyberattacks.

“First responders and state officials are often the first line of defense when it comes to keeping our communities safe,” Nielsen said. “Whether it is a cyber intrusion, natural disaster, or a terrorist incident, we are fortunate to have strong state partners to help protect Americans from these dangers. I thank them for their leadership and commitment.”

President Donald J. Trump in May named Fallin co-chair of the Council of Governors. She is among 10 to serve on the bipartisan national council, which focuses on effective collaborative efforts between the federal and state governments on issues related to the National Guard, homeland security, and disaster response.