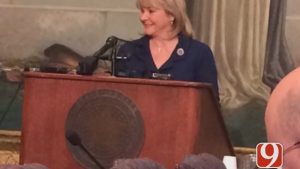 Oklahoma Gov. Mary Fallin again laid out her plan to get the state out of its budget crisis, blaming in part what she called the dramatic downturn in the state’s energy sector. She also was targeted by protesters in the gallery.

In her 8th and final state of the state address delivered to the joint session of the legislature,  the Governor warned, “Oklahoma will continue to struggle if we don’t fix the structural deficits of our budget.”

She called on the state’s top leaders to focus on the reality of the state budget deficit. In addition to eliminating the state sales tax on groceries and expanding the state’s sales tax base, she said her tax reform plan calls for gasoline and diesel taxes to go toward roads and bridges.

“My plan will ensure taxes associated with roads and bridges are the funding source for maintenance of roads and bridges—period—returning individual income taxes to the General Revenue Fund,” stated the governor.  “This plan does not impact the projects in the Department of Transportation’s 8-year plan.”

She went on to point out that Oklahoma ranks 48th in diesel tax in the nation and 49th in gasoline tax.

“I am  proposing a new revenue stream by increasing our gas and diesel taxes to the regional state average, but still below the national average,” added Gov. Fallin. “By trading out the use of individual income tax to a gas and diesel tax dedicated to fund our roads and bridges, this budget change dramatically improves the percentage of revenue collections the Legislature could control.”

She said state leaders have discussed the issue for decades and it is time to put the fuel taxes into roads and bridges.

In presenting her budget plan, the governor distributed her ideas in a packet containing three budgets—-red, yellow and green.

The red budget cuts $868 million which reflects the state shortfall. The yellow budget drains nearly half of the remaining balance of the Rainy Day Fund and still  makes substantial cuts.

“These budget would be detrimental to our state,” said Gov. Fallin. “Neither should be considered. The green budget–my budget—represents a path forward, stabilizing the budget’s structural challenges while investing in core, essential services.”

She told the Representatives and Senators her plan would give them more control in directing how the money can be spent to meet pressing needs.

She urged legislators to work together and chart a new and brighter course for the state.

Immediately at the end of her speed, protesters in the gallery shouted and booed. Legislative leaders ordered the gallery to be cleared and while they waited,  one woman shouted protests at Governor Fallin.