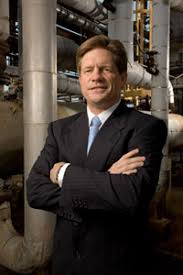 A surprise announcement was made Wednesday that Jeff Hildebrand, the man who founded Hilcorp Energy Co. in Houston 29 years ago is stepping down as chief executive officer.

Known for handing out big bonuses to his workers, Hildebrand is the 209th wealthiest person in the world. Bloomberg says he has a net worth of $7.6 billion. His firm has regularly been ranked among Fortune Magazine’s “100 Best Companies to Work for.”

Just three years ago as oil prices were drastically low, Hilcorp workers reportedly were paid $100,000 each for hitting the company’s five-year goals for production and reserves. Previously, the company handed out cars to workers for reaching the same goals in 2010.

The new CEO is Greg Lalicker, a petroleum engineer who joined the company in 2006 after stints at BHP Billiton Ltd.’s oil unit and at McKinsey & Co.

Hildebrand will remain as executive chairman of the board.