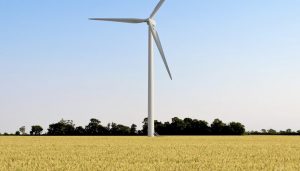 Former Garfield County Assessor Wade Patterson is a strong defender of the current taxing method of wind farms in Oklahoma…ad valorem. He is against any gross production tax on the industry, saying local school districts and counties would be the loser.

Speaking this week at a Wind Coalition news conference at the State Capitol, Patterson, now a consultant urged legislators to maintain the current system.

Wind farms in 23 counties pay the ad valorem taxes and much of it goes to local school districts. Based on the $74 million in property taxes paid by the various wind farms, Patterson said that amounts to schools getting 85 cents of every dollar.

“It never leaves the county. That is a great revenue stream in a county,” he said. “We have taken something in the middle of a wheat field and put the largest tax growth in these rural areas.”

“You can’t double tax an asset—if you take this off ad valorem and put it on gross production, we would lose,” he added. “If you want to simply move money around, we’re gonna lose money locally.”

He warned legislators it is paramount to keep the tax revenue locally and explained the wind industry is paying 78 percent of one school district’s sinking fund.

“That is phenomenal,” said Patterson.  “I urge you to keep this a local tax.”