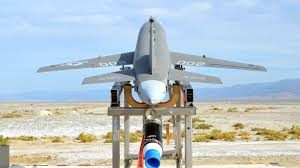 “Through the flight test missions, Kratos was able to test and demonstrate numerous upgrades and enhancements to the aerial drone system, and the system’s enhanced capability to support Kratos customers and their missions around the globe,” said the company.

However, the firm would not reveal other information about the tests “due to competitive and other considerations.”

Eric DeMarco, President & CEO of Kratos, said, “Kratos’ continued focus on developing increased and enhanced mission capability is extremely important to both our international and domestic customers. These recent successful tests enable us to apply Kratos unmanned aerial drone systems to a rapidly increasing number of mission types with an increasing number of customer sets. As we evolve our capabilities and increase the capability and level of threat representation, we are sharing many of these enhancements across our portfolio of high performance jet powered unmanned aerial drone systems to maintain our technological and low cost advantage in the industry, which is a clear competitive differentiator for Kratos. We are currently working toward a large production contract with a new international customer which we hope to receive in the next several months.”

The company announced in January it will create operations in Oklahoma City and move 350 workers to the state. Kratos already had four engineers and 25 support employees at a temporary site in the city. It is in the process of searching for a permanent facility near Tinker Air Force Base where the company intends to house its expanded research and production offices.

Kratos executives indicated they hope to have their Oklahoma City operation open by the end of the year and eventually employ 350 to 500 workers within five years.