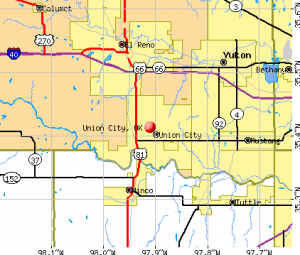 A legal fight is brewing between a drilling company and Union City in Canadian County.

The flap with S and S Star Operating LLC, a nearly 2-year old Oklahoma City firm, started when the company made a mistake and drilled a wastewater injection well inside the municipal limits without city permission.

The Yukon Review reported this week Union City leaders allowed the firm to complete the drilling because of claims it would be dangerous to stop drilling in the middle of the project. An emergency meeting was held last week followed by a meeting this week with drilling company representatives and members of the city planning commission and the  town commission.

After two hours and 20 minutes of discussion, the matter was tabled by the planning commission. The commission had been asked for a decision on the permission needed for two wells to be drilled by the company. City Attorney Tom Ferguson was ordered to negotiate matters with the drilling company.

The completed well will need a variance under town regulations because it is 460 feet from the property line and not the required 500 feet.

S and S spokesman Ryan Surroz said once the wells are completed, they will handle about 15,000 barrels of wastewater from fracked oil and gas wells every day.  While residents of the town of 1,600 expressed concerns over the increased truck traffic, Surroz indicated that up to 60 percent of the water would be piped in to the two wells.

The city attorney contends the city has limited authority over the wells because the matter rests with the Oklahoma Corporation Commission. The town can set certain restrictions regarding truck traffic and road repairs, but Ferguson indicated the city cannot reject the wells.